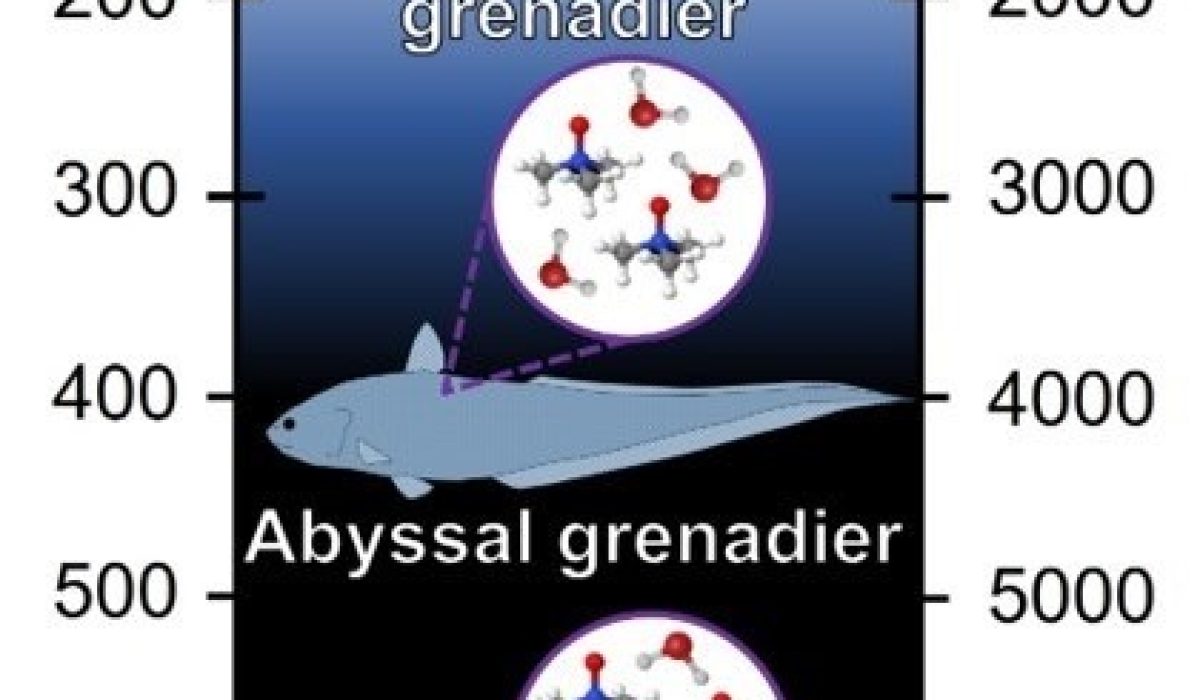 The deeper sea creatures live, the more inhospitable and extreme the environment they must cope with. In one of the deepest points in the Pacific – the Mariana Trench, 11 kilometers below the sea surface – the pressure is 1.1 kbar or eight tons per square inch. That is a 1,100-fold increase of the pressure experienced at the Earth’s surface.

At high pressure, though, the network of water molecules begins to distort and change shape. When this happens to the water inside living cells, it prevents vital bio-chemical processes from taking place – and kills the organism.

In reporting their findings, the researchers in Leeds have for the first time been able to provide an explanation of how a molecule found in the cells of marine organisms counteracts the effect of external pressure on the water molecules.

Professor Lorna Dougan, from the School of Physics and Astronomy at Leeds, said: “Life has adapted to survive and thrive in environmental extremes. In the depths of the oceans, organisms live under extreme high pressures that would destroy human life.

“These high pressures distort the liquid water that resides in all life, resulting in detrimental impacts to the biomolecules that underpin all biological processes.

“We need to understand what happens to water under pressure and how pressure-adapted organisms combat these effects. If we can understand how these organisms survive at extreme pressure, we can apply these findings to the wider study of biomolecular stability.”

The molecule found in cells that produces the protective effect against high external pressure is called TMAO – trimethylamine N-oxide. Studies have shown that the amount of TMAO in ocean-dwelling organisms increases in line with the depth of their habitat.

Led by Dr Harrison Laurent, also from the School of Physics and Astronomy, the study used one of the most advanced analytical facilities in the world to investigate how intense pressure alters the hydrogen bonds between neighbouring water molecules.

Called the ISIS Neutron and Muon Source, the analytical facility at the STFC Rutherford Appleton Laboratory in Oxfordshire was used to fire a beam of neutrons – which are sub-atomic particles – at samples of water with and without TMAO. The analysis was done at low pressure, 25 bar, and at high pressure, 4 kbar.

The test revealed details of the atomic structure of the water molecules.

At high pressure, the hydrogen bonds in the pure water sample became distorted and less stable and the overall network of water molecules became compacted.

The presence of TMAO, however, strengthened and stabilised the hydrogen bonding and maintained the network structure of the water molecules.

Dr Laurent said: “The TMAO provides a structural anchor which results in the water being able to resist the extreme pressure it is under. The findings are important because they help scientists understand the processes by which organisms have adapted to survive the extreme conditions found in the oceans.”

From the study, the research team have also been able to develop what is called an “osmolyte protection ratio”, which predicts the level of TMAO needed in the cells of marine organisms so they can survive at a specific depth in the oceans.

“Recently published research has revealed new species living at the bottom of the deep seas. We are now understanding the remarkable adaptations that have allowed life to exploit these habitats.”

This article is based on the press release from the University of Leeds. Content may be edited.

fish
This div height required for enabling the sticky sidebar